The main reason we were on the East coast was the 50th reunion of Princeton’s 1964 undefeated football team, on which I played.  So on day 4 we caught a bus at Port Authority that took us right to Princeton’s Palmer Square, which is the location of the wonderful Nassau Inn, our home for 2 nights.

The 1964 team had a GREAT reunion, thanks to the ideas and efforts of a small reunion team which included my Berea High School classmate and Princeton star, Ron Landeck.  Turnout was awesome with a very high percentage of teammates returning along with coaches, trainers, and managers.   In many cases it was 5 decades since teammates had been in contact, so it was very special to be able to renew friendships, catch up at least a little and relive some of those moments.

Friday evening the reunion featured an unforgettable reception and dinner, which itself was made totally awesome by short, thoughtful talks by teammates, former coaches, and the University President.  Saturday morning was a meeting of teammates to remember and reflect on those 8 (now 9) teammates no longer with us.

Then it was on to Princeton Stadium for that afternoon’s game (lopsided win by Harvard).  Afterwards, next door at the new version of Frick Chemistry Lab, we had a social hour which included ’64-’66 classmates, leaving time for more socializing in town with friends.

After 50 years it was so rewarding to reunite with guys who were teammates for a great season and who went on to different careers all over the world, in many cases to be seen rarely if at all except, possibly, at Princeton’s world class reunions.

Sunday morning, with the Princeton “Dinky” train station in the middle of being relocated and not in operation, we took a cab to the nearby Princeton Junction train station and caught Amtrak to Philadelphia, where we changed trains for a stop in Baltimore to visit with our dear friend, John Racanelli, CEO of the National Aquarium.

This was a major, major highlight of our trip – John met us upon our entry and hosted a 3 hour tour of the Aquarium, in front of and behind scenes, as well as a most pleasant social hour overlooking Baltimore harbor and Chesapeake Bay. 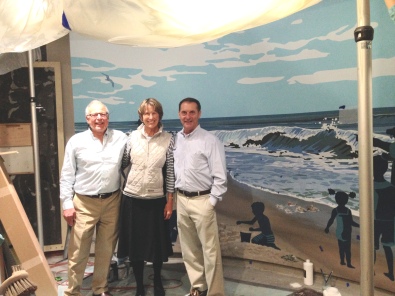 In the construction zone of a new Aquarium exhibit with John R.

We hadn’t seen John for about 3 years – he’d been working in the Bay Area with renowned ocean explorer and spokesperson, Sylvia Earle, but gave that up and moved his family to Baltimore to take what is turning out to be a dream job.  John and I had many one to one conversations over the years, as well as swims, and I am so happy he and the Aquarium connected when the top position opened up, since they’re perfect for each other.

After our visit with John, my wife and I reunited with Amtrak for the quick trip to Union Station in Washington.  As most readers know, D.C. has an incredible selection of world 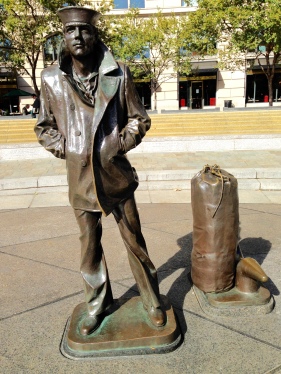 The Lone Sailor of the impressive Navy Memorial

Lobby of the National Postal Museum

We were especially glad to discover the under publicized and under appreciated Smithsonian National Postal Museum, which traces postal services from before our country’s founding.  At the museum we were Very Fortunate to connect with an extraordinary exhibit, Alphabetilately.  It was created 10 or so years ago by several Bay Area stamp collectors and 26 Bay Area graphics arts shops and merits, I believe, a more permanent home.

Panorama of a portion of the Alphabetilately exhibit, extended to October 15, 2015

After being tourists for a couple days in D.C. with plenty of walking and $1 bus rides, we made our way (by the Metro of course) to Dulles and then United to SFO.

When thinking about your next holiday, consider international destinations but don’t overlook the U.S.!

Companion of Wally who is featured at MrWally.com. More at https://www.linkedin.com/in/kristjake/
View all posts by Krist →
This entry was posted in Museums, Princeton, Schools & Colleges and tagged Alphabetilately, Aquarium, Postal Museum, Princeton. Bookmark the permalink.