Having visited relatives in Orange County’s Laguna Beach for several decades, last year my wife and I purchased a cottage there, where we are, for the 1st time, near to family.  (Just 3 blocks & 2 miles).  Laguna, an hour south of downtown Los Angeles and with a population of 23,000, is an engaged community as well as a tourist destination.   It is quite stunning visually and offers a range 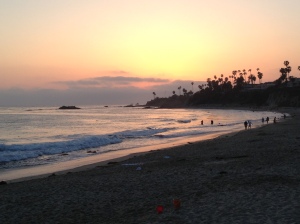 The sun sets over the Pacific, view from downtown’s Main Beach

of recreational opportunities (surfing, swimming, diving, paddling, hiking, mountain biking are all easy to access). Also, Laguna is unique in that it is bounded by the Pacific, hills, parks, and open space such that by motorized vehicle there are only 3 ways in and out.

Laguna began as a vacation/beach town and grew as an artists’ colony, spawning a fine art museum, an art college, and several galleries. The area is considered an excellent place to raise a family and is now populated by talented folks in a wide range of endeavors.

Last month, during a two-week period, there were 3 events connected to outstanding entrepreneurs that I’d like to bring to your attention because they reflect Laguna and suggest the breadth of the entrepreneurial talent around town.

I.  Paddle out for Hobart (“Hobie”) Alter, inventor and surf business trailblazer

On April 18th there was a paddle out ceremony for Hobie Alter who had passed away in late March. Hobie was born in Orange County and as a teenager settled in Laguna Beach, where he raised his family, lived most of his life, built businesses, and where the premier surf apparel shop is named “Hobie.” He started in business as a leading pioneer in the surfing business – he was an inventive board builder and shaper and, beginning in 1954, was proprietor of southern California’s first retail surf shop. Alter was the progenitor of the ubiquitous Hobie Cat line of catamarans which remain in production, still the most popular line of catamarans ever.

I never met Hobie, but these and other articles convey that he was an admirable, very well liked guy with an awesome portfolio of talent:

Adjacent to Laguna is the city of Newport Beach, which in late April headquartered the 14th annual Newport Beach Film Festival.    On April 30th, the Festival honored MacGillivray Freeman Films (MFF), the world’s largest and most successful producer of IMAX films, on its 50th anniversary. MFF has always been headquartered in Laguna and the MacGillivray family resides there. (Freeman died in an accident in 1976.) 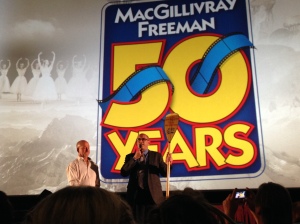 This relatively small company is creator of the highest-grossing giant-screen film ever produced (Everest, 1998), the longest-running documentary to play in one theatre (To Fly! has played at the Smithsonian’s National Air & Space Museum non-stop since 1976), two Oscar®-nominated documentaries, The Living Sea (1995) and Dolphins (2000), and most recently Grand Canyon Adventure: River at Risk 3D, the sixth in its acclaimed series of water-themed conservation films.

Truly a family business in the best sense, MFF has 3+ dozen employees and continues to conceptualize and produce leading IMAX films and will release Journey to the South Pacific later this year.

OK, admit it – you weren’t aware that there was a festival celebrating kelp, the ocean resident which is one of the world’s fastest growing plants!

On Saturday, April 26th, Laguna’s Main Beach was the place to be – young & old came from all over Orange County to participate in the 5th annual Kelpfest.   Founded and produced by marine biologist and entrepreneur, Nancy Caruso, the festival is 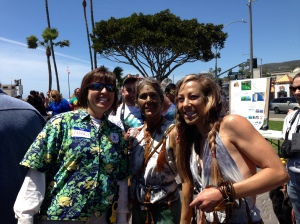 Kelpfest Founder, Nancy Caruso, on left with the kelp dancers

a community based celebration of kelp, which is enjoying a resurgence in the waters off Laguna and where it shelters a growing abundance of wildlife.

The Festival features art programs for youth, live and thematic entertainment, and exhibits on local ocean organizations. One exhibit at this year’s Festival featured Professor Steven L. Manley of Cal State Long Beach who created Kelp Watch 2014 to study, with colleagues at UC Berkeley, radioactivity in local kelp beds in an attempt to ascertain what effect the Fukushima disaster is having in local waters.

Kelp beds are plentiful off Laguna and storms wash it up, this also at Main Beach.

Kelp is a rather large subject and I’m motivated to learn more about the plant and, possibly, write a post on it.

Companion of Wally who is featured at MrWally.com. More at https://www.linkedin.com/in/kristjake/
View all posts by Krist →
This entry was posted in Entrepreneurs & Entrepreneurism, People of note. Bookmark the permalink.