You may have heard of the passing last month of Dick Bass, who, in 1985, became the first person to summit the highest mountain on each of the seven continents.  That achievement is described in the well received book he co-authored, Seven Summits, published in 1988.

Dick Bass’s pioneering effort is said to be the inspiration for many others to strive for some or all of the seven summits*.  (Of course, most people don’t strive to or summit any of those mountains, and I’d guess that only a few summit more than one or two.)

Three good friends, who have named themselves the “Sharks,” have climbed many mountains together over 5 decades and were influenced by Dick Bass, at least a little – they’ve done 6 of the seven summits.  Last week I was fortunate to join up with that very unique and accomplished social network on a hike whose goal was the summit of Mount Morrison.

On the world stage, or even just California’s, at 12,241 feet, Mount Morrison isn’t a particularly high mountain – many of its neighbors in the Sierra Nevada are higher, including 10 over 14,000 feet.  In fact, at first glance, one might think Mt. Morrison’s top, classified a Class 2 summit and therefore achievable without the need for technical climbing, should be a snap.

This was the 3rd visit to Mount Morrison by the Sharks, who had been rebuffed twice earlier by unsafe weather.  The morning of the current effort was cloudless and we left camp reasonably early, well before 8.  Our plan was to take some unmarked, unimproved roads by vehicle to gain about 500 feet, which we did.  Starting our hike at 8:25, for an hour or so we made good progress by simply  following a dry creek bed up.  After a break we continued up, leaving the creek bed for easy but up cross-country.  After another hour or so we stopped to consult our maps to try to figure out where the summit was and the easiest and preferred route to it.  We spotted a faint trail in what we thought was the right direction so we followed it as it got steeper.  Our pace slowed and it was courteous of the stronger hikers to accommodate the slowest one (me).  Around noon, at around 11,000 feet, we conveniently met two hikers coming down off the mountain. 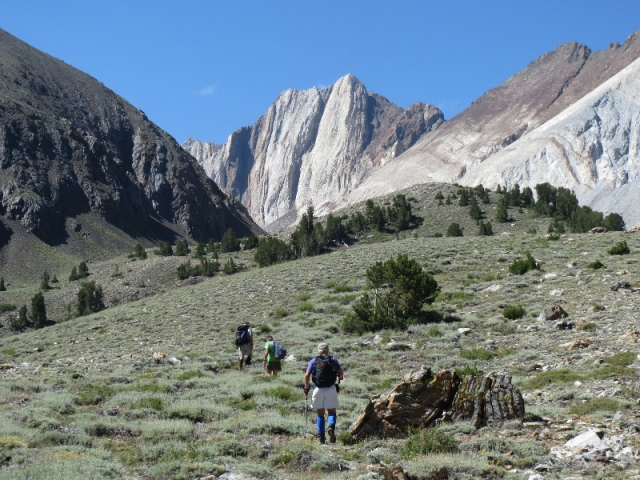 Having left the creek bed, cross country up. Mt. Morrison is to the right but not in view, except a lower flank.  Photo courtesy of Bob Wyler.

In a wide ranging conversation, they confirmed we were on the right path to the top, and helpfully pointed out the specifics of advancing all the way, another 1200 feet or so up even steeper terrain.  As I have some discomfort with heights and could easily envision the onset of that condition soon from a visual of both our route and the surrounding terrain, I informed the others that I’d gone far enough and would wait for them near the trail when I could find a relatively flat spot.  This was fine with everyone.

About 100 feet down I did find a flat spot the size of a twin bed near a saddle whose overlook provided a sufficient taste of  acrophobia .  Although I expected a 2 hour interlude, I’d hardly gotten comfortable when I was joined by another of our hiking group.  This hiker, the strongest that day, explained that everyone was turning back because of various minor afflictions such as shortness of breath and an occasional problem with balance. 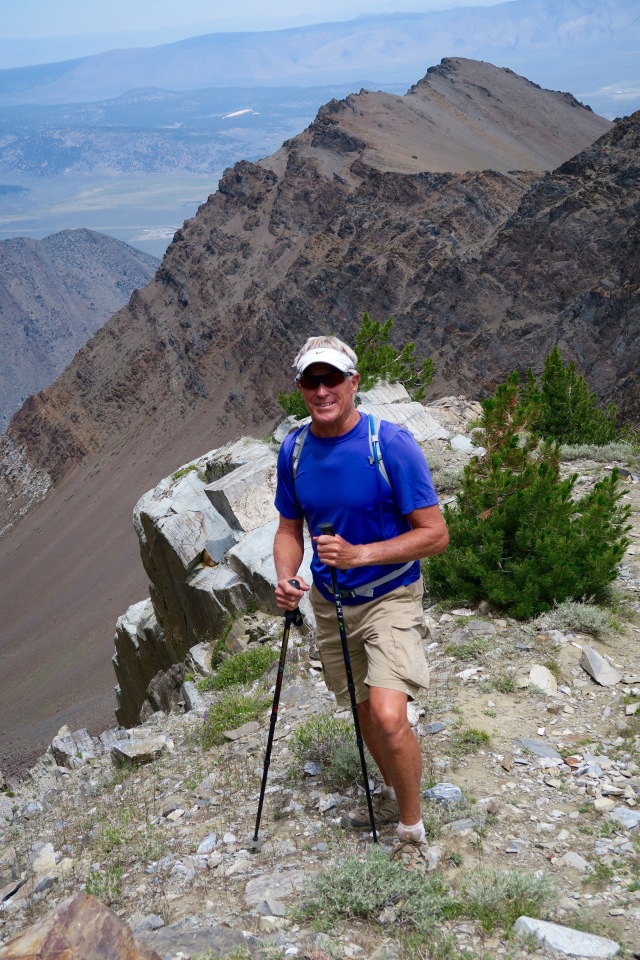 Bob catches a breath near what may be our high point of 11,000 or so feet. Photo courtesy of Hank Skade.

We soon had a mini-reunion, a bonding moment, and walked down pretty much the way we’d come up.  (Except that it’s big country, it’s different going down, etc.)

Even though none of the group summited, it was a great time, nonetheless.   We had excellent weather and great scenery, companionship, and hiking.  I’d put the root causes of our turning back to the fact that none of us, all seniors, are getting any younger and for anyone of us who may have once been super attracted to bag another summit, that disposition is lessening with age.  I feel good about leaving sea level on Sunday and on Tuesday hiking from an elevation of 8000 feet up another 3000 feet.

By the time we got down to the 4Runner it was 3:30 or so, a nice time for a visit to Wild Willie’s Hot Spring just a few miles away!  The modestly improved hot spring, popular with other tourists too, was beautifully situated in the middle of a very large meadow with expansive views.  Most unusual, in fact surreal, was the herd of very black cows that was closely surrounding the spring’s gathering point.

Companion of Wally who is featured at MrWally.com. More at https://www.linkedin.com/in/kristjake/
View all posts by Krist →
This entry was posted in Outdoors, People of note, Sierra Nevada, Terrestrial. Bookmark the permalink.