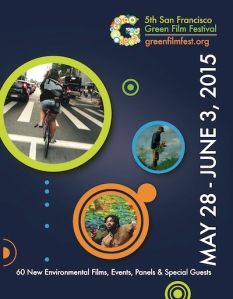 through June 3rd, the 5th annual San Francisco Green Film Festival promises to be the best and best attended in its short history.  And, as its attractive, informative, and highly functional website suggests, this Festival also appears destined to be the most polished and influential yet.

The Festival is the brainchild of Rachel Caplan, who I am fortunate to have collaborated with on the San Francisco Ocean Film Festival.  As Festival Director in 2008 and 2009, Rachel was excellent as both an executor and strategic thinker, and a pleasure to work with as well.   As she’s conveyed, Rachel was often approached by independent filmmakers striving to get their environmentally themed documentaries screened.  She realized that, from agriculture to rainforests, from mining to monkeys, there was a diverse mix of environmental stories all seeking to reach audiences in San Francisco.

The entrepreneur she is, Rachel spotted an opportunity to use the power and immediacy of these films, coupled with the local environmental expertise and enthusiasm, to inspire concern and, she anticipates, social change.  She planned and then in 2011 launched the first San Francisco Green Film Festival with new films from around the world and an emphasis on audience discussion and participation.

Astute film programming coupled with an emphasis on audience participation is a formula patterned on the very successful and admirable Environmental Film Festival, an annual two-week long, multi-venue production in Washington D.C..  Its 24th festival will take place next March and will, once again, feature numerous programs, many free of charge.

Gaining more traction with each festival, the SF Green Film Festival has quickly risen to the forefront in the environment-centric segment of the film festival market.  The Festival’s 2014 Annual Report presents in a visually attractive way the myriad of dimensions to a film festival and conveys how far SF Green has come after just 4 festivals.  That report’s metrics are impressive and they suggest SF Green’s performance has already surpassed that of several older festivals in its peer group.

Details on this year’s festival are here and this year’s program can be downloaded from this link.

My hat is off to Rachel for conceiving the Festival, bootstrapping it, and assembling and organizing the team and resources to implement her vision.

Over the next week the SF Green Film Festival will screen 60 films from 26 countries in 25+ programs.  If you’ll be in or near San Francisco during the Festival, I recommend you consider making time for it.

Companion of Wally who is featured at MrWally.com. More at https://www.linkedin.com/in/kristjake/
View all posts by Krist →
This entry was posted in Books & Films, Entrepreneurs & Entrepreneurism, Non-profits, Outdoors, San Francisco. Bookmark the permalink.