“He who has the gold makes the rules.”

In this year’s America’s Cup, the defending Oracle US team achieved what some have called the biggest comeback ever in all of sports. Down 8-1 to Emirates Team New Zealand, Oracle won the next 8 races to become the first to 9 wins and thereby retain the Cup.

The competition was held on San Francisco Bay, where family, friends, and/or my dog recreate every day. It was an event that’s been hyped in San Francisco for over a year, so it was hard to ignore.

However, for most of the competition, which started in mid summer with 3 challengers, it was pretty much a non-event. Then, in the finals, when New Zealand took the large lead, many locals knew it extremely unlikely that Oracle would prevail and stopped showing up.

So, after 9 races, excepting aficionados and tourists from New Zealand, the Bay Area’s interest in the Cup was pretty low – but then, with each Oracle win, interest began to build. Oracle finally did prevail, evidently in a “fair and square” way, by tweaking the boat to perform better, by changing their approach to route selection, and by improving their onboard teamwork.

A week ago, the day after the final race of the 2013 Americas Cup, I sent the following email to a former neighbor and friend from New Zealand I hadn’t seen for a while:

Been thinking about you as the New Zealand boat kept losing races. Don’t know if I’ve ever seen a top flight competitor as distraught as Dean Barker was Monday and, especially, yesterday – both L***** & I feel for him and his crew.

They should hold their heads high and be proud, not down. I have a sense Oracle outspent NZ big time, allowing Oracle to hire better, pay more overtime, have more experts on the tuning job, etc., etc. It’s hard to beat an extremely competitive multi-billionaire who wants to win at almost any cost. One can only imagine what may have gone on behind the scenes…we may never know.

L***** & I were down at Pier 27 yesterday and saw up close the teams as they arrived for the award ceremony.

Looking back on that email, it continues to encapsulate my impression of the Cup and my sympathy toward Dean Barker and the entire New Zealand team. 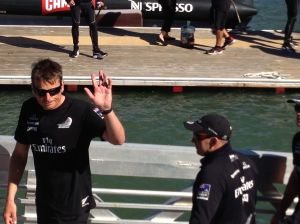 Not to take anything away from Oracle – they worked really hard (as did NZ), improved, and performed on the water. 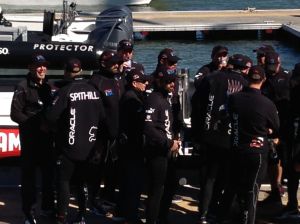 Larry Ellison and Oracle Team upon arrival for awards ceremony

For much more on Americas Cup and the backstory involving the Golden Gate Yacht Club, see the following:

1) On the America’s Cup and the races, the very excellent site by Jack Griffin, CupExperience.

3) For some backstory on the host club, the Golden Gate Yacht Club, this New York Times article. And this. 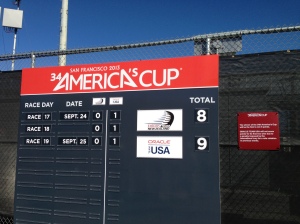 After race #17, the final’s scorecard.

Companion of Wally who is featured at MrWally.com. More at https://www.linkedin.com/in/kristjake/
View all posts by Krist →
This entry was posted in Outdoors, Saltwater, San Francisco. Bookmark the permalink.